I recently started a job at Microsoft. In my first week I have already learned so much about Windows, I figured I would try to put it all into writing. This post is coming to you from a Windows Subsystem for Linux console!

I'm headed to Seattle because I'M JOINING MICROSOFT, at the airport wearing this awesome shirt from @listonb & @Taylorb_msft ���� pic.twitter.com/8rnAg1dsPd

New job and I got a Windows computer and a Linux computer! If you are new to my blog, let me tell you: I love setting up a perfect desktop experience. I’ve written a few posts on it (for Linux), you should check them out. Setting up a Windows computer is something I have not done in quite some time. I will describe a bit how to set up a windows machine in a reproducible way at the end of this post.

I would like to thank Rich Turner, John Starks, Taylor Brown, and Sarah Cooley for taking the time to explain a lot of the following to me. :)

First, a little background on how WSL works…

You can learn a lot more about this from the Windows Subsystem for Linux Overview. I will go over some of the parts I found to be the most interesting.

The Windows NT kernel was designed from the beginning to support running POSIX, OS/2, and other subsystems. In the early days, these were just user-mode programs that would interact with ntdll to perform system calls. Since the Windows NT kernel supported POSIX there was already a fork system call implemented in the kernel. However, the Windows NT call for fork, NtCreateProcess, is not directly compatible with the Linux syscall so it has some special handling you can read about more under System Calls. 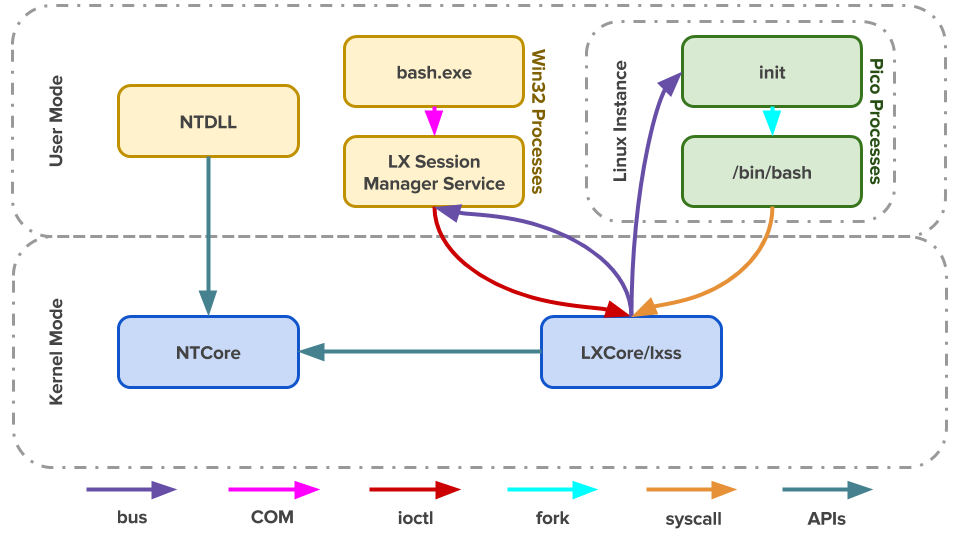 As you can see in the diagram above, init and /bin/bash are Pico processes. Pico processes work by having system calls and user mode exceptions dispatched to a paired driver. Pico processes and drivers allow Windows Subsystem for Linux to load executable ELF binaries into a Pico process’ address space and execute them on top of a Linux-compatible layer of system calls.

You can read even more in depth on this from the MSDN Pico Processes post.

One of the first things I did in WSL was run a syscall fuzzer. I knew it would break but it was interesting for the purposes of figuring out which syscalls had been implemented without looking at the source. This was how I realized PID and mount namespaces were already implemented into clone and unshare!

The WSL kernel drivers, lxss.sys and lxcore.sys, handle the Linux system call requests and translate them to the Windows NT kernel. None of this code came from the Linux kernel, it was all re-implemented by Windows engineers. This is truly mind blowing.

When a syscall is made from a Linux executable it gets passed to lxcore.sys which will translate it into the equivalent Windows NT call. For example, open to NtOpenFile and kill to NTTerminateProcess. If there is no mapping then the Windows kernel mode driver will handle the request directly. This was the case for fork, which has lxcore.sys prepare the process to be copied and then call the appropriate Windows NT kernel APIs to create and copy the process.

You can learn more from the MSDN System Calls post.

Since WSL allows for running Linux binaries natively (without a VM), this allows for some really fun interactions.

You can even launch Windows GUI apps as well this way! Imagine a Linux setup where you can launch PowerPoint without a VM…. well this is it!!

You can also run X Applications in WSL. You just need an X server. I used vcxsrv to try it out. I run i3 on all my Linux machines and tried it out in WSL like my awesome coworker Brian Ketelsen did in his blog post. 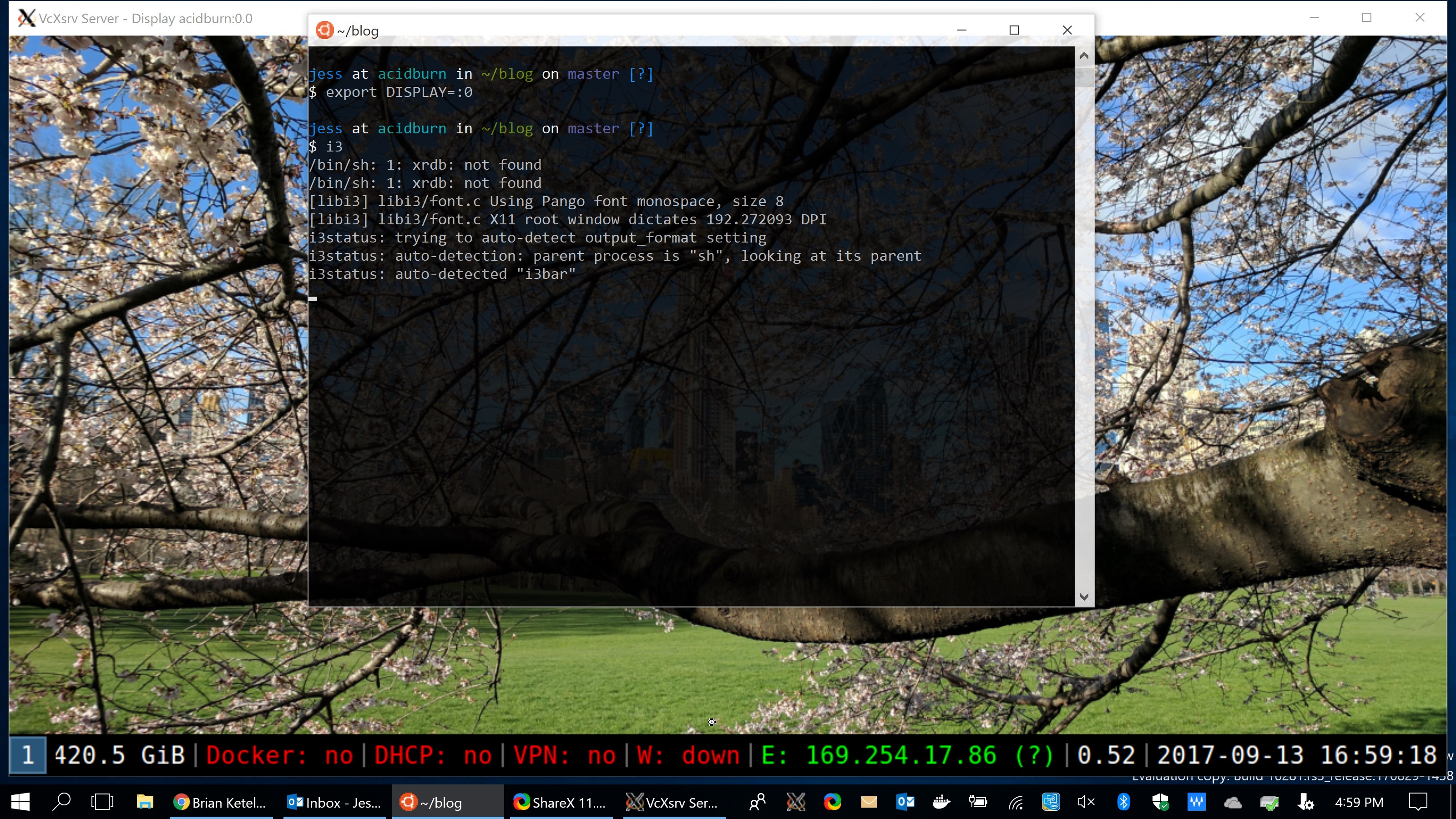 The hidpi is a little gross but if you play with the settings for the X server you can get it to a tolerable place. While I think this is neat for running whatever X applications you love, personally I am going to stick to using tmux as my entrypoint for WSL and using the Windows GUI apps I need vs. Linux X applications. This just feels less heavy (remember, I love minimal) and I haven’t come across an X application I can not live without for the time being. It’s nice to know X applications can work when I do need something though. :)

There are still quite a few pain points with using Windows Subsystem for Linux, but it’s important to remember it is still in the beginnings. So that you all have an idea of what to expect I will list them here and we can watch how they improve in future builds. Each item links to the respective GitHub issue.

Keep in mind, I am using the default Windows console for everything. It has improved significantly since I played with it 2 years ago while we were working on porting the Docker client and daemon to Windows. :)

Setting Up a Windows Machine in a Reproducible Way

This was super important to me since I am used to Linux where everything is scriptable and I have scripts for starting from a blank machine to my exact perfect setup. A few people mentioned I should check out boxstarter.org for making this possible on Windows.

Turns out it works super well! My gist for my machine lives on github. There is another powershell script there for uninstalling a few programs. I love all things minimal so I like to uninstall applications I will never use. I also learned some cool powershell commands for listing all your installed applications.

I am going to be scripting more of this out in the future with regard to pinning applications to the taskbar in powershell and a bunch of other settings. Stay tuned.

Overall, I hope you now understand some basics around Windows Subsystem for Linux and are as excited as I am to see it grow and evolve in the future!