This post is kind of like “part two” on my series on all the weird things I do for my personal infrastructure. If you missed “part one”, you should check out Home Lab is the Dopest Lab.

I run a lot of little things to make my life easier, like a CI, some bots, and a bunch of services just for the lolz. This post will go over all of those. These run scattered across my NUCs and the cloud.

Let’s start with the most useful.

I host my own continuous integration server. Yes, you guessed it… it’s Jenkins. I use the Jenkins DSL plugin to keep everything in sync. You can find all my DSLs in my repo github.com/jessfraz/jenkins-dsl. This has all the configurations for views, keeps forks up to date, mirrors all my repositories to private git (more on this in git), builds all Dockerfiles to push to Docker Hub and my private registry (more on this in private docker registry) and a bunch of maintenance scripts.

The Makefile in this repo calls out to bash scripts which generate new DSLs for any new GitHub repos I create. Yep I even generate the automation…

There’s a bunch of other fun things in there as well that you can discover by poking around yourself.

I host my own postfix server alongside Jenkins. You can find the postfix docker image at r.j3ss.co/postfix or the Dockerfile. It’s super minimal and less gross than literally every other postfix image in existence.

I host my own private docker registry with my own notary server and authentication server. Why? Well because about 4 years ago when I started using docker, Docker Hub was super slow and I came to love having my own super fast one.

I still push all the images to both Docker Hub and my registry and both are signed so it’s really like I am using Docker Hub as my backup. Yay, highly available… just kidding.

I made a pretty shitty UI for it. You can play with it at r.j3ss.co. The UI is from my reg project but the server component lives in the server subdirectory.

The really nice thing about both the reg command line and server is that you can get a list of CVEs on an image. 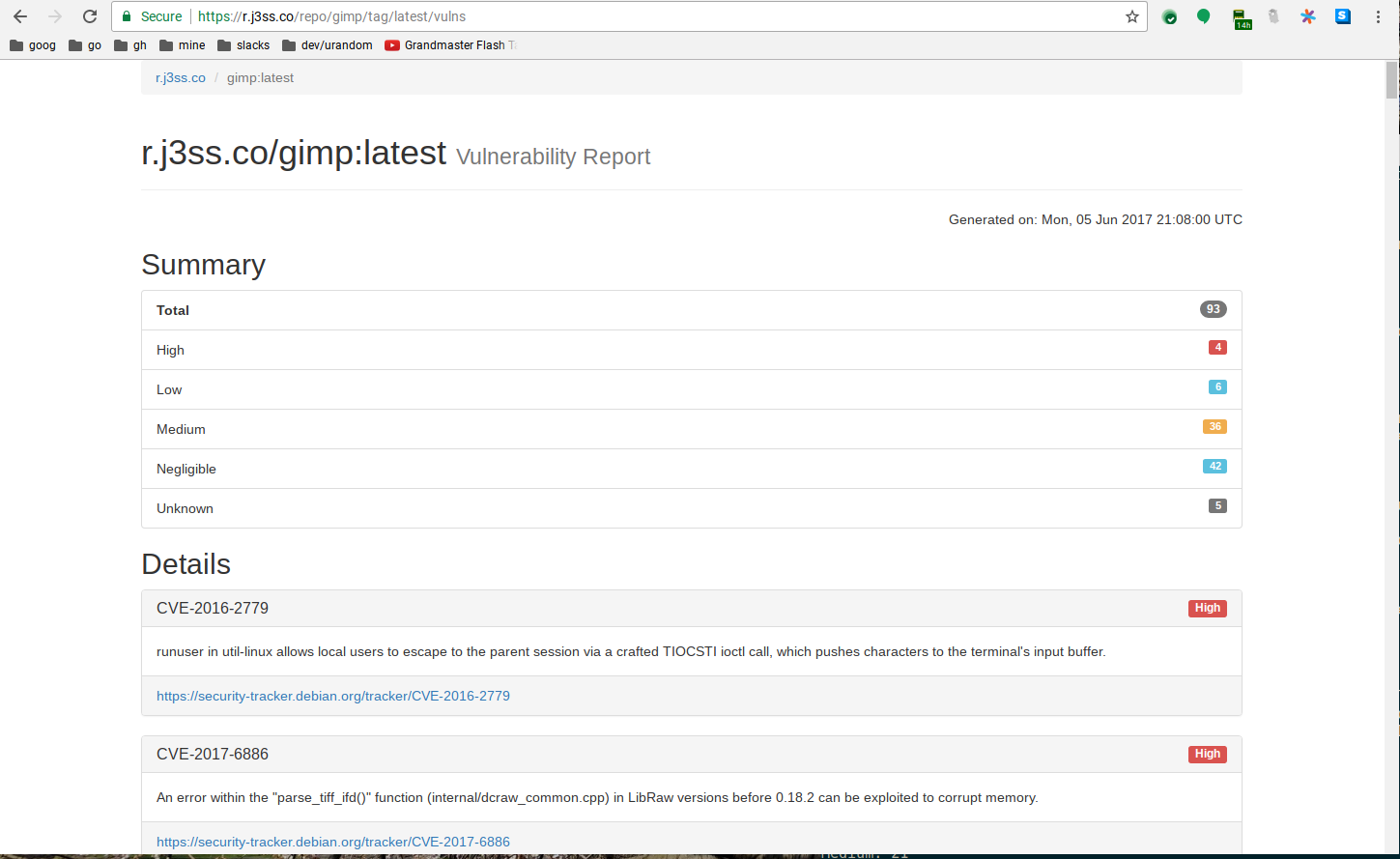 I do this by hosting my own instance of CoreOS’s Clair.

Most of my Dockerfiles live at github.com/jessfraz/dockerfiles if you are curious.

I also went over all of this on my talk on Over Engineering my Laptop / Container Linux on the Desktop. This includes all the reasons why I have continuous integration as well.

I have a script to cleanup the registry of old images clean-registry. This deletes old registry blobs that are not used in the latest version of the tag. I don’t really care about old images and I don’t want to have a huge registry filled with old shit. There is a jenkins DSL to run this.

I host my own git server. You can find the gitserver docker image at r.j3ss.co/gitserver or the Dockerfile.

It has it’s own UI that is run with Gitiles. You can find the Gitiles docker image at r.j3ss.co/gitiles or the Dockerfile.

This is one of my most useful things. It’s a GitHub Bot to automatically delete your fork’s branches after a pull request has been merged.

I am so OCD about keeping git repos clean and this is my little helper.

Check out the repo: github.com/jessfraz/ghb0t.

I host my own IRC Bouncer with ZNC. You can find the ZNC docker image at r.j3ss.co/znc or the Dockerfile.

This service provides email notifications for sourcegraph/checkup. If you are unfamiliar with checkup… it’s distributed, lock-free, self-hosted health checks and status pages, written in Go.

I wrote a small little server to send email alerts for it and it lives at github.com/jessfraz/upmail.

Not really all that novel but I also run an iPython server for doing little script things in. I just use the jupyter/minimal-notebook Docker image for that.

I run a lot of little shitty services for a personal pastebin and other things but those are all really less cool. My attention span for blog posts is about 5 minutes and we have runneth over so I am going to call it a day with this… until next time. Peace out.