Setting the Record Straight: containers vs. Zones vs. Jails vs. VMs

I’m tired of having the same conversation over and over again with people so I figured I would put it into a blog post.

Many people ask me if I have tried or what I think of Solaris Zones / BSD Jails. The answer is simply: I have tried them and I definitely like them. The conversation then heads towards them telling me how Zones and Jails are far superior to containers and that I should basically just give up with Linux containers and use VMs.

Which to be honest is a bit forward to someone who has spent a large portion of her career working with containers and trying to make containers more secure. Here is what I tell them:

The Design of Solaris Zones, BSD Jails, VMs and containers are very different.

Solaris Zones, BSD Jails, and VMs are first class concepts. This is clear from the Solaris Zone Design Spec and the BSD Jails Handbook. I hope it can go without saying that VMs are very much a first class object without me having to link you somewhere :P.

Containers on the other hand are not real things. I have said this in many talks and I’m saying it again now.

I am trying to make this distinction very clear to make a point. The designs are different. PERIOD.

Let’s go over some of the things you can do with containers that you CANNOT do with Jails or Zones or VMs.

Since containers are made with specific building blocks of namespaces this allows for doing some super neat things like sharing namespaces.

There are many different namespaces but I will give a couple examples.

This specific example can be seen in a demo by Arnaud Porterie from our talk at Dockercon EU in 2015. You can have your application running in one container, then in a different container sharing a net namespace you can run wireshark and inspect the packets from the first container.

You could also do the same with sharing a pid namespace, except instead of running wireshark you can run strace and debug your application from an entirely different container.

I assume if you are on my blog you are familiar with my posts on running containers on your desktop.

To really drive home a point I’m going to make an analogy describing each of these things in terms of legos.

VMs, Jails, and Zones are if you bought the legos already put together AND glued. So it’s basically the Death Star and you don’t have to do any work you get it pre-assembled out of the box. You can’t even take it apart.

Containers come with just the pieces so while the box says to build the Death Star, you are not tied to that. You can build two boats connected by a flipping ocean and no one is going to stop you.

This kind of flexibility allows for super awesome things but of course comes at a price.

Now is the point where the person I would be having the conversation with starts yelling at me that containers are not secure. Hello, thank you, I am aware. Also if anyone gives a shit about actually fixing this, it’s me.

Again, containers were not a top level design, they are something we build from Linux primitives. Zones, Jails, and VMs are designed as top level isolation.

The cool things I expressed above allow for a level of flexibility and control that Zones, Jails, and VMs do not. By design.

This extra complexity leads to bugs that lead to container escapes. Don’t get me wrong you could also escape a VM, Jail or Zone, but the design is not as complicated as that of the primitives that make up containers. Less is more, and the less complexity you have the less likely you will have odd, edge case bugs. 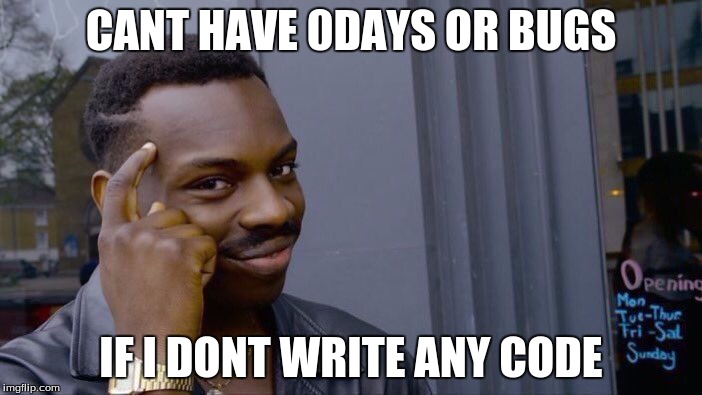 The point I am trying to make is that Jails, Zones, VMs and containers were designed and built in different ways. Containers are not a Linux isolation primitive, they merely consume Linux primitives which allow for some interesting interactions. They are not perfect; Nothing is.

We can make them better by reducing some of the complexity and building hardening features around them which is a goal I have been trying and will continue trying to do.

You can get a sandbox level of isolation with containers, which I wrote in more detail about here. But this requires doing the work of building the Death Star from your pieces of Seccomp, AppArmor, and SELinux profiles.

I personally love Zones, Jails, and VMs and I think they all have a particular use case. The confusion with containers primarily lies in assuming they fulfill the same use case as the others; which they do not. Containers allow for a flexibility and control that is not possible with Jails, Zones, or VMs. And THAT IS A FEATURE.